The idea of ​​requiring nutrition labels to show the sugar and fat content on the front of food packages is getting increased attention ahead of the first White House conference on hunger and nutrition policy in more than half a century.

Official task force report informing the conference, it included front-of-package nutrition labels as a recommended policy measure. “It would be really foolish not to take what was in these guidelines very, very seriously,” said Courtney Gein, president and CEO of the Sugar Association.

The report specifically calls on the Food and Drug Administration to “develop an effective front-of-package (FOP) labeling scheme that uses or is based on a transparent, consistent, and science-based system for profiling nutrients or specific nutrition parameters.”

Last month, the Center for Science in the Public Interest filed a petition to the Food and Drug Administration who laid out his vision for FOP labels that would be mandatory and nutrient-specific. CSPI also clarified that labels must list calories and a graphic or other explanatory element that displays the levels of added sugar, sodium, and saturated fat per serving.

Gein, a registered dietitian, said the Sugar Association would support “any evidence-based policy,” and she knows the FDA is conducting focus groups and studies of FOP labels.

But she is concerned that introducing front-of-pack labeling without adequate information about what it says may not help people improve their diets. She notes that even with the Nutrition Facts panel, obesity and diabetes rates have not decreased, and the country has not realized the expected health care savings. It’s not that the Nutrition Facts panel was inherently ineffective, she said, “it’s just that nobody was trained how to use it.”

Gein noted that cereal and yogurt manufacturers have reduced their sugar content, but haven’t been paid enough for it.

Joe Scimeca, psenior vice president of regulatory and scientific affairs at the International Dairy Association, says his group’s position is that any front-of-pack label should remain be voluntary and be “based on scientific evidence” and “easily understood by consumers”.

IDFA member companies include yogurt makers such as Danone and Chobani, as well as cheese, ice cream, fluid milk and ingredient producers.

Studies of Chilean consumers that CSPI cites in its petition to the FDA show measurable effects. For example, Eva Grinthal, CSPI’s senior policy scientist, said that a behavioral study that tracked how shoppers changed their purchases based on the labels they saw on packages “showed that the overall utility of the selected products increased by 26% when comparing from the group that looked at foods with nutrient warnings compared to a “no label” control.

Other studies have shown a decrease in overall purchases of calories, sugar, sodium and saturated fat among Chilean shoppers.

“I don’t think the food industry can say with an open face that there isn’t enough research to support mandatory front-of-package labeling,” Grinthal said. “The call for it in the U.S. has really picked up in recent years, and I think that’s largely because of the movement around the world.”

Grinthal and Gein point out that tracking a shopper’s choices at the grocery store over the decades it might take to detect disease linked to high sugar, sodium or saturated fat intake would be a challenging study. Still, Gein would like to see a better attempt to quantify how labels correlate with health.

“I’d just like to see a million-dollar study, which seems like a lot of money, but it’s not something that’s supposed to cure everybody,” Gein said.

In addition, she is concerned that if one is not clear about the desired outcomes, the downstream effects may be different than expected. As an example, she cites the concept of “reformulation,” the idea that food companies will change their recipes either to comply with the new regulations — as many have done in anticipation of the ban on trans fats in foods — or to prevent some negative effect. imaginary labels from application.

For example, if a new front-of-package label were to set a threshold for how many grams of added sugar would trigger a visual image such as a stop sign, the company could slightly reduce the amount of sugar per serving to avoid that label.

CSPI, on the other hand, considers reformulation to be one of the desired outcomes of front-of-package labels.

Even if a company brings a product just below the level that requires additional labeling, “it’s still a change in the food supply that can have a significant benefit,” Grinthal said.

But Gein said companies can also substitute other ingredients, such as non-food sweeteners like stevia, aspartame, sucralose or sorbitol, to get around the label. Front-of-package label suggestions typically focus on added sugar, saturated fat, and sodium.

“If you only focus on the three nutrients you’re concerned about, you’re missing the whole package of food. And then, all of a sudden, kids aren’t getting fiber because they don’t buy cereal because there’s a label on the front that warns about added sugar?”

While she acknowledges that the reformulation could have a significant impact on what people eat, Gein is hesitant to accept that it will be inherently positive.

“If we learn the lesson that these things don’t happen in isolation and that you have to look at the whole picture, ‘how do you cook food?'” She hopes that food scientists and nutritionists will be at the table when public health officials and politicians do any conclusions. “You need to have a diverse group of experts representing all sides of how food is made and how it gets into people’s mouths.”

Meanwhile, the Consumer Brands Association, which represents food manufacturers, and FMI, the Food Industry Association, which represents retailers and other food industry voices, have their own voluntary front-of-package labels. The facts are ahead it’s a system that can show both nutrients of concern and nutrients to look for, like potassium or fiber. The labels appear on a variety of foods, including cereal, granola bars and tacos.

“Consumer brands support evidence-based labeling solutions that have proven benefits for consumers and clear information,” Sarah Gallo, the association’s vice president of product policy, said in a statement to Agro-Pulse. Facts Up Front meets existing labeling requirements, and Gallo notes that it can be modified to accommodate changes in dietary guidelines. Whether or not anything concrete about front-of-package labels comes out of the White House conference, CSPI’s petition remains with the FDA — with more than 2,700 public comments so far — and front-of-package labels have support in Congress. The Law on modernization of labeling of food products was introduced by Rep. Frank Pallone, D-J., of the House of Representatives, and Sen. Richard Blumenthal, R-Conn., in the Senate.

“We think it’s very promising in terms of pushing consumers to say, ‘You know, maybe choose the wrong one,’ or ‘maybe buy it less often or less,'” she said. And with varying levels of English literacy and nutrition knowledge among the population, she sees “simplified, quick and easy messaging as facilitating more equal access to nutrition information.”

https://www.agri-pulse.com/articles/18227-will-front-of-package-labeling-get-front-and-center-attention-at-white-house-conference-on-hunger-nutrition-and-health Will a front-of-package label get attention at the White House Conference on Hunger, Nutrition and Health? The Minnesota farmer says spring weather is “equal” for his state 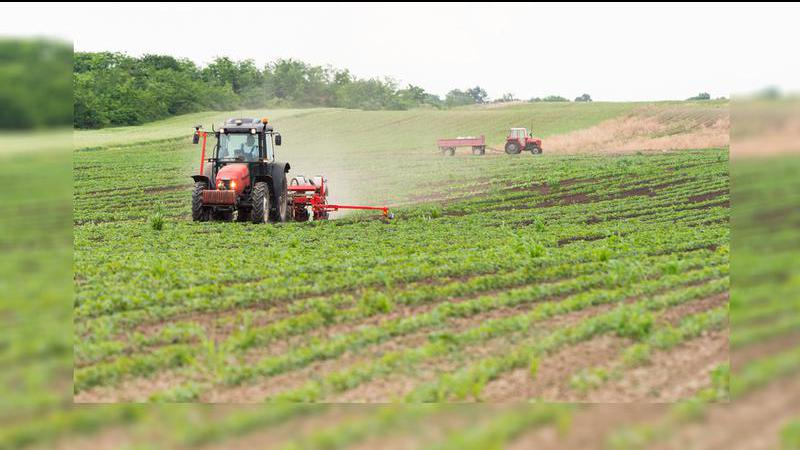 In general, rain helps growers who need it, but some fields are flooded