In recent days, Russia has announced several withdrawals of troops from Ukraine’s borders, raising hopes that a devastating military escalation in Ukraine could be prevented.

However, the West says there has been no significant reduction in Russian forces, which have been at the center of escalating tensions between Moscow and the West for weeks.

Here’s what we know about Russia’s deployment:

How many troops and where?
Since December, Moscow has been holding large-scale ground, air and sea war games near Ukrainian territory in Russia and its ally Belarus.

It has a large number of forces concentrated in Russia, in the Moscow-annexed Crimea, in Belarus and in the Black Sea – that is, on the eastern, northern and southern borders of Ukraine.

But Russia does not say how many troops are involved.

The only data provided from Western countries are mainly based on satellite images.

NATO has estimated the deployment of “well over 100,000” Russian troops, while US President Joe Biden recently said the figure is “over 150,000”.

Russia has also sent heavy equipment to the exercise, including tanks, missiles and air defense systems.

In contrast to a similar deployment in the spring of 2021, Russia, according to outside sources, has deployed medical teams and transported large reserves of fuel.

Most of the images available on earth come from eyewitnesses, who in recent weeks have posted on social media photos of columns of tanks parked in border villages and trains loaded with military equipment.

True or false retreat?
Every day since Tuesday, Russia announces that units participating in the exercises are returning to their garrisons.

In a recent statement, the Russian Defense Ministry said on Thursday that it was returning military forces from Moscow-annexed Crimea after the end of the war.

Belarus has also promised that all Russian troops sent to the country for the war games will leave after the February 20 exercise.

But the West has said their intelligence shows a different situation on the ground.

The White House said Wednesday that Moscow had increased its presence on the border with Ukraine to “7,000 troops,” some of whom arrived earlier in the day.

The President of Ukraine Volodymyr Zelensky stated that there was no evidence of the withdrawal of Russian troops, saying that Moscow was simply saving forces.

What is needed for de-escalation
Russian military expert Pavel Felgenhauer said he believed that Moscow had indeed “decided to withdraw”, but that it could take several weeks.

“The transition from ultra-high combat readiness to return to peace will take more than a month,” he told AFP.

At the same time, Felgenhauer did not rule out the possibility that the rollback of Moscow was not real.

“It is possible that Russia’s withdrawal statements are misleading in order to disorient NATO and the United States, to create a strategic surprise,” he said.

The West, led by Washington, continues to say that Russia’s invasion of Ukraine could happen at any moment.

Russia denies plans to attack Ukraine, but is concerned that Ukraine – once part of the Soviet Union – may one day join NATO.

But the deployment of units, usually stationed in Russia’s Far East, to Ukraine’s borders looked threatening.

Their return to their garrisons, some up to 8,000 miles away, would be an encouraging sign.

A return to peace talks on the conflict between Kiev forces and pro-Russian insurgents in eastern Ukraine will also be a sign of de-escalation.

But this week, Russia’s parliament asked President Vladimir Putin to recognize the independence of Ukraine’s pro-Moscow rebel territories, which has worried the West.

This week, Kyiv also became the target of a new cyberattack that affected the defense ministry and the army. Kiev has blamed Moscow, and the Kremlin denies involvement.

Military experts believed that the Russian military offensive could be preceded by massive cyber attacks.

https://www.defencetalk.com/what-we-know-about-russias-troop-deployment-near-ukraine-77985/ What do we know about the deployment of Russian troops near Ukraine 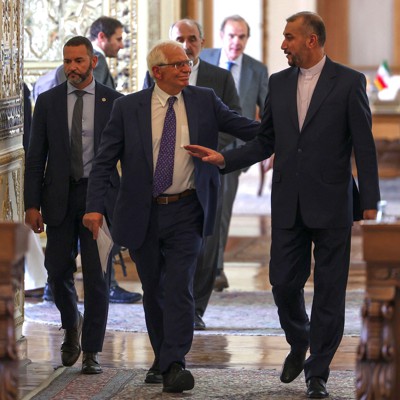 Iran is headed for disaster as nuclear talks stall Intuit will pay $ 141 million in restitution for fraudulent tax practices